Professor of Philosophy presents in Amsterdam

SHREVEPORT, LA — Dr. Kenneth Aizawa, Centenary's Charles T. Beaird Professor of Philosophy, recently presented his work "Distinguishing Virtue Epistemology and Extended Cognition" at the Extended Cognition and Epistemology Conference held in Amsterdam, June 6-7. Listed among a set of international contributors, Aizawa was invited based on work in his last book, The Bounds of Cognition, co-authored with Fred Adams. 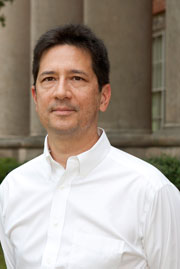 "The research attempts to articulate the role of the body in the life of the mind," said Aizawa. "What are the consequences of the kind of bodies we have for the kinds of thinking we do?"

The peer-reviewed papers that were presented at the conference are being prepared for an upcoming special issue of Philosophical Explorations.

"What is of enduring value to students is...the academic skills and information they gather primarily through course work," said Aizawa. "The conduit for those skills and information is the faculty. The kind of energy one gets from academic events is brought back to the classroom, and conference participation brings the latest academic developments to our students."

Dr. Aizawa has also given two graduate seminars in Germany, where he is on fellowship from May 15-July 31. His research has received considerable attention around the world. In recent years, he has been invited to give lectures in Germany, Great Britain, Israel, the Netherlands, Norway, and Spain.

Local philanthropist, businessman, and philosopher Charles T. Beaird, in recognition of the importance of philosophy and its centrality to a liberal arts education, created the endowed chair that Aizawa currently holds.

The Extended Cognition and Epistemology Conference was hosted by the Philosophy and Ethics section of Eindhoven University of Technology, in close collaboration with Andy Clark and Duncan Pritchard of the University of Edinburgh. The Netherlands Organization for Scientific Research sponsored the event.