SHREVEPORT, LA — Centenary President David Rowe announced today that Michael Pearson will join the College as Vice President for Finance and Administration. His appointment marks a return to Centenary for Pearson, who served as the College's Controller for eight years. 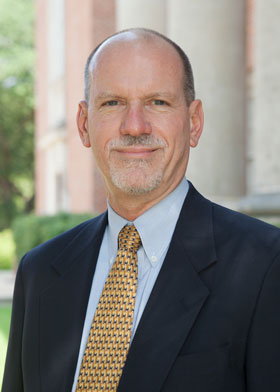 "I look forward to returning to Centenary in this new role," said Pearson. "I have had the benefit of seeing the College through very challenging financial times and am pleased to return to a strong Centenary, on track to finishing its third year of balanced budgets with the third largest annual fund on record. As Louisiana's only Tier One National Liberal Arts College, Centenary is poised financially to capitalize on its strong academic reputation."

Pearson possesses more than three decades of diversified accounting and administrative experience in the business and nonprofit sectors. In addition to his time at Centenary, Pearson spent 12 years of his 20 years with Arkla, Inc., a Fortune 500 oil and gas company in various management roles and three years as the Chief Financial Officer for North Louisiana Goodwill Industries.

"Mike's experience on and off campus will bring both the continuity and the new ideas we need to propel the institution forward," said Dr. Rowe. "We are thrilled to have such an accomplished professional and long-time friend rejoining the Centenary family."

Pearson's appointment as Vice President for Finance and Administration takes effect immediately. He joins a leadership team that has made enormous progress in strengthening the financial stability of the College over the past several years. He starts full-time on July 30, 2012.

He is a graduate of Henderson State University in Arkadelphia, AR and is a member of the Louisiana Society of CPAs and the American Institute of CPAs. Pearson and his family have resided in the Shreveport/Bossier City, LA area for more than 30 years.