Faith and science collide for student during Greece May Module

SHREVEPORT, LA — Professors David Havird and Lisa Nicoletti explored "Life Amid the Ruins" in Greece for the 2012 May Module with a group of Centenary students. The month-long, immersive course enabled students to explore the distinctive features of ancient ruins and modern life that define Greece and its citizens. 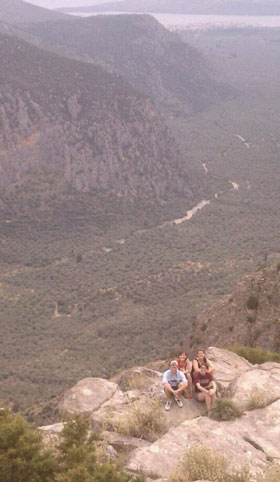 Students pose among the hills of Delphi

A major objective of the course was for students to experience the area by foot or public transportation and to appreciate the culture and customs of the area. Using contemporary Greek authors and travel guides, the group traveled through Athens, visited ancient Mycenae and Epidaurus, and explored the monasteries of Meteora and Delphi. Junior chemistry major Lea Hair felt compelled to write down her observations and feelings as she looked at the ancient site at Delphi:

"This is the place where Phythias delivered her oracles, where her words changed the ancient world. This was a place for the faithful to find their answers—a place of mystery. Yet her mutterings were not divinely inspired by anything except methane...I passed a priest dressed in typical black and white garb as I followed the 'Sacred Way' up the mountain. I wonder if he dismisses her prophecies as things which only gave vague suggestion?"

The students were also able to consider famous earlier travelers' accounts of the sites they visited. The volcanic island of Santorini, referred to by a poet as the place "where the world blew up about the time of Minos," was one of the many destinations of the group. While exploring the archaeological site of Ancient Thera, a Roman outpost where a Ptolemaic garrison was housed, Hair was struck by the ravages of time:

"What once stood distinctly apart has now faded. The bones of our world are the remnants of ancient people. They support our life. We build on their roads, cities, walls, and innovations."