SHREVEPORT, LA — The Magale Library will host a reception for an exhibit of wildlife photography on Saturday, August 18, from 2:00-4:00 p.m. in the lobby. The exhibit is the work of nature photographer Ronnie Maum and other local artists. The bulk of Maum's work was photographed at the Red River National Wildlife Refuge. 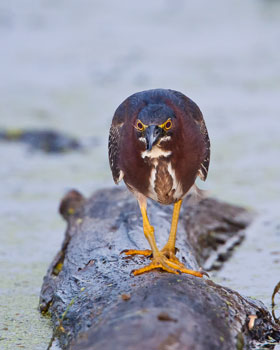 Maum, a Louisiana native is a graduate of Louisiana Tech University and earned his MBA from Louisiana State University-Shreveport. He began taking photographs when he bought a camera with his first paycheck from his first job.

His nature photography increased when he attended a birding event at the Red River National Wildlife Refuge. Not long after, he obtained a permit from the Refuge allowing him to photograph and document wildlife throughout the area.

"After one visit, I knew the Refuge was going to be a special place for nature photography," said Maum. "The 'education' doesn't ever stop. The more you learn, the more you realize that you really haven't scratched the surface."

Maum serves on the Friends of Red River National Wildlife Refuge Board of Directors as a member-at-large and has contributed many images to the Refuge's new Visitor Center.

Many of the prints that are displayed in Magale are in Maum's book, Discovering Louisiana's Red River National Wildlife Refuge. He is also the author of Refuge Encounters of the Bird Kind...and Other Species Too.

More information on Ronnie Maum and his work can be found at Ronnie Maum Enterprises, LLC.