SHREVEPORT, LA — For the fifth consecutive year, Forbes has named Centenary College as one of the nation's top colleges. Centenary joins a select group of institutions, representing just 15 percent of the nearly 4,000 colleges in the United States, to be named as one of "America's Top Colleges" and "Best Private Colleges" by Forbes.com. 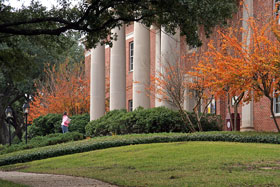 "At Centenary, we pride ourselves on the exemplary education our faculty provides to students, in the classroom and in the local and global community," said Centenary Provost Mike Hemphill. "To once again receive this national honor along with many other prestigious institutions is a nod to the success of our first rate instruction and central focus on the student experience. We will continue to provide our students the tools essential to engage the challenges of a changing world."

The annual rankings are based on post-graduate success, student satisfaction, debt, four-year graduation rate, and competitive awards. Unlike other national rankings, Forbes does not consider a school's reputation or selectivity. For more information, visit Forbes Top Colleges rankings.