SHREVEPORT, LA — Since July 15, Centenary student Tia Landrum has been training in the African nation, Ghana as part of an intensive medical internship. Landrum's training has included working in a mobile medical clinic that provides medical, dental, and prescription services to over 300 people in rural Ghana. In early August, while snapping a picture of a local witch doctor, Landrum's world changed. In the background of her photos was a small, motionless figure lying on the side of the road. 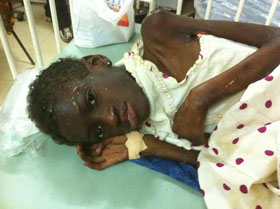 "Today, the sickest living person I've ever seen smiled at me as she clasped my hand in her tiny, withered one," wrote Landrum in an update on her Facebook page. "She fell asleep smiling after I gave her small amounts of water. No one knows her name—she is so malnourished she cannot speak. She has been hit by vehicles three times, and her untreated wounds are festering."

At 5 feet tall, the emaciated and injured 10-year-old orphan girl weighed a mere 30 lbs. Landrum and the few people who have assisted with the young girl's care have named her "Adom," which in her native language means "the grace of god." Landrum simply calls her "Grace."

Landrum promised Global Brigades, the nonprofit organization providing her internship, that she would fund the orphan's care. When the rest of the organization's interns and supervisors left for a six-day safari, Landrum stayed behind to attend to Grace. Unsure of how she would carry out her pledge, Landrum first secured and paid for a caregiver through her own meager allowance while she sought an orphanage and hospital to take care of the child's long-term needs. Through Global Brigades, Landrum was also able to set up an account to accept donations for Grace's care.

Grace now resides at the Cape Coast hospital, which, in addition to providing critical medical care, has afforded her amenities taken for granted by most: a bath, clean clothes, and even a stuffed animal. Importantly, her wounds are healing, and she is eating. Though she is still exhausted, Grace's skin now glows with improved health. Landrum steadfastly attends to the smallest details of the child's care, for example, decorating Grace's hospital room with colorful crayon drawings.

Landrum still must find an orphanage to care for the girl and has begun raising essential funds for Grace as noted in a recent Facebook post: "We have a long, dangerous road to take with her, and funding is paramount to every channel we must use for her care. I cannot begin to thank you all for giving Grace this chance. She may now fight for her life in peace without worry of being removed from her hospital bed until she is well."

Though initial donations have taken care of Grace's tests and a caregiver for the next month, more funding is needed to secure her a place in an orphanage. To donate, visit Giving Back in Action.

Landrum was introduced to the medical internship opportunity with Global Brigades during a Centenary-sponsored trip to Chicago in April 2012 for the World Summit of Nobel Peace Laureates.