Student travels to Lebanon for fellowship on U.S.-Arab relations

SHREVEPORT, LA — Centenary student Jordan Ring traveled to Lebanon this summer on fellowship from the National Council on U.S.-Arab Relations (NCUSAR). The fellowships educate participants about the Arab world and require them to share their newfound knowledge with their local community. During her ten-day stay, Ring was struck by the duality of life in Lebanon: 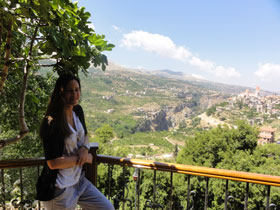 "Lebanon is full of competing ideas and influences. It is not an uncommon sight to see a woman well-covered wearing a hijab sharing the sidewalk with a woman in a spaghetti-strap sundress. One passes a Maronite church neighboring a mosque. Crumbling buildings stand next to beautifully constructed Mediterranean-inspired structures. Street signs bear multiple translations of English, Arabic, and French."

Ring along with nine other students from around the United States visited with political leaders and social activists throughout the Lebanon region: U.S. Embassy Political and Economics Chief Daniel Garbe, the President of the Association of Lebanese Industrialists, and representatives from the Lebanon Association for Democractic Elections. The civic engagements were interspersed with sightseeing tours, including a guided walking tour around Beirut.

"Beirut is prone to multiple blackouts a day due to the government's inefficient management of the country's electrical infrastructure," said Ring. "However, due to the consistency of these blackouts, many places have their own generators and often go unfazed by the blackouts. Also, we were informed that traffic laws in Beirut are optional, and traffic lights mean little."

Throughout her time in Lebanon, Ring marveled at the strength of the Lebanese and their ability to carry on despite being surrounded by armed forces on a daily basis.

"Heavily armed military police are placed throughout the city to protect government buildings and the private residences of prominent Lebanese politicians," said Ring. "Yet when you take a step back you see yourself surrounded by people who are just trying to carry on. People are shuffling along to work or the market. You see college students in their shorts and flip flops trying to manage the heat—which could hold its own against Louisiana heat."

Ring received the fellowship through her participation in Centenary's Model Arab League (MAL) in the Spring. All MAL participants are eligible for Arabic language programs, summer internships, and cultural immersion/study abroad trips funded by NSUSAR. The Model Arab League (much like the Model United Nations teams that operate at other colleges and universities) requires groups to represent one of the Arab League's 22 member-states. This past year, Centenary's team represented Syria.