SHREVEPORT, LA — Centenary students Whitney Tates and Aaron Martin have grown as artists and boosted their portfolios by designing book covers for Les Cahiers du Tintamarre and Les Editions Tintamarre. Established by Dr. Dana Kress, Les Editions Tintamarre is a heritage language press dedicated to the original printing and re-printing of American works written in any language other than English. 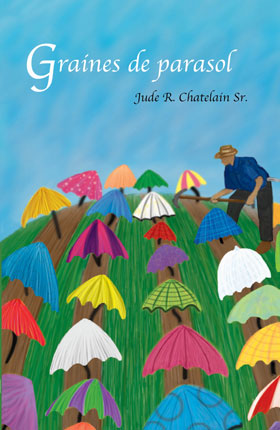 "Les Editions Tintamarre is a learning press and, unlike other university presses, students play a major role here," said Dr. Dana Kress, Chair of the Foreign Language Department and Editor-in-Chief. "The whole creation process is a big undertaking for all of us—we have to learn about book printing, typography, requirements for the Library of Congress, and copyright laws. Students rarely receive academic credit for the work they do for Tintamarre—instead students approach the projects as jobs in which they can display their talent and passion."

Students involved with Les Editions Tintamarre are held to a high standard. To get published, the quality of the students' work has to be on par with industry standards and anything that might appear in a bookstore.

Senior Whitney Tates, a Studio Art major from Shreveport, developed the cover for Graines de parasol, a collection of stories by Jude Chatelain, Sr. The illustration is based on a story in the collection that focuses on the literal planting of parasols. She found the process to be challenging yet rewarding.

"I had to learn everything about InDesign as well as the book and CD printing process," said Tates. "The entire project has given me such a great appreciation for what it takes to make a book happen."

Tates currently has two others works in progress for the press: a cover illustration for Portraits littéraires de la Nouvelle Orléans and the illustration and layout for the children's book Le pont du nez-piqué. 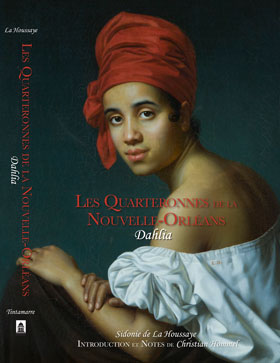 Fellow artist and Communication major Aaron Martin designed the cover for Voyage Aux Prairies Osages by Victor Tixier. Drawing on colors and textures from images hand-picked by Dr. Kress, Martin created a cohesive design. His work with the press has helped him hone in on his future occupation.

"I know now that I definitely want it (future occupation) to be design-oriented," said Martin. "This opportunity has taught me a lot—it has not only given me the experience to tackle future projects but also shown me that there are a myriad of design-related problems that need solutions. I really look forward to continuing down this path and learning and growing as a designer."

The release of Martin's next design for the cover of Les Quarteronnes de la Nouvelle-Orléans: Dahlia by Sidonie de La Houssaye, which is actually the third book in a series being published by Tintamarre, is forthcoming.

Students like Tates and Martin who are only involved in the design process do not edit the translations of the works. Instead, they are able to work with a team of professionals across the country. Past translators and editors have come from Brown University, the University of Wisconsin, and the University of Missouri.

Les Editions Tintamarre has been a self-supporting press and has published 50 works from Louisiana since 2003. The press originally began operations with support from a Louisiana Board of Regents Support Fund grant.

Centenary is also home to the only French language newspaper in the United States operated and written by students, Le Tintamarre.

The full catalogue of Les Cahiers du Tintamarre and Les Editions Tintamarre is available online. Purchase links for the Centenary Bookstore or Amazon are available on each work's webpage.