SHREVEPORT, LA — Centenary recently welcomed new and returning students to campus for the fall semester shortly after receiving word of the college's high marks in a national financial sustainability study. 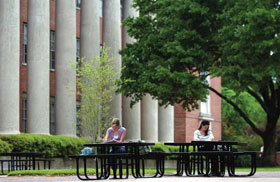 "This cohort of first-year students is one of the most impressive groups joining the Centenary family in years, adding to the academic quality of our already strong student body," said Centenary President David Rowe. "It is always heartening to welcome new students into the Centenary family as well as to reconnect with our returning students. Our student body this year will be smaller and stronger, helping us achieve vital targets for the long-term sustainability and strength of the institution."

Total enrollment for the new year stands at 802,with the incoming class of 2016 showing up as one of the academically strongest new classes in recent years. The first-year students lead over a five-year period in average SAT and ACT scores. They also have a higher average class rank—top 23 percent of their graduating classes—and a higher average GPA at 3.66. This class also has the highest percentage of valedictorians and salutatorians.

Centenary was also named in a national report in the top 20 percent of institutions based on financial sustainability. The study of 1,692 colleges and universities found that while one-third are on an "unsustainable path," Centenary is doing very well.

"We have achieved vital targets for the long-term sustainability and strength of the institution," said Rowe. "The steps we have taken and must continue to take have not been and will not be easy—but we are moving forward. We are anticipating another wonderful year of developing leaders for a changing world."

Along with Davidson, Rhodes, Sewanee, and Washington & Lee, Centenary is among only five out of the sixteen Associated Colleges of the South (ACS) schools named to the top performance category in the report, The Financially Sustainable University, released by national consulting firms Sterling Partners and Bain & Company. The College has balanced the operating budget with a decreased dependence on the endowment for the third year in a row. Donors are also investing in Centenary's future, generously posting record years for giving for three of the last four years, including over $5 million donated last year to the Centenary Fund for Student Scholarships.