SHREVEPORT, LA — Centenary senior Jordan Ring recently returned from an Advisory Council session for the Nobel Women's Initiative (NWI) International Campaign to Stop Rape and Gender Violence in Conflict in New York City with trustee Nancy Word '70. The Campaign is a global civil society movement designed to power the political will necessary in overcoming the issue of rape in conflict. 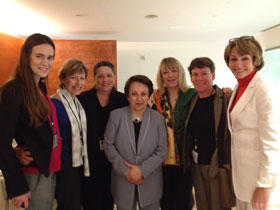 "To be included with this group of women—if only for a few days—was an overwhelming experience but even more overwhelming was the topic of discussion," said Ring. "In many conflicts today, rape is the rule rather than the exception. The resulting mentality convinces many that rape is an inevitable part of war. The NWI begs to differ."

The three-day, New York City-based session concluded with a meeting of state and NGO representatives at the U.N. General Assembly Side Event on Sexual Violence. Leymah Gbowee, Nobel Peace Laureate 2011, NWI representatives, and journalist Lauren Wolfe made formal statements to the U.N. during the side event. Ring was particularly struck by a representative from Norway who responded that rape is a gender issue and requires the attention of both men and women.

"The Campaign brings hope," said Ring. "Various forms of gender-based violence are all interconnected. A state's law regarding domestic violence will influence its behavior in armed conflict."

Ring encourages others to make a pledge on The Campaign's website and to further the cause through social media outlets:

"You can have conversations that explain this is not just a women's issue but an issue for all of humanity. And, finally, but most importantly, we can all stop pretending that rape in an inevitable product of conflict."

Upon returning to Centenary, Ring wrote a column "Will you take the pledge?" sharing her experience at the council session for the campus newspaper, The Conglomerate.