SHREVEPORT, LA — Centenary alumna Mindy McKoin '09 is in the running for an esteemed final five spot at the ArcLight Cinemas Documentary Film Festival for her documentary Fight Like a Lady. Over 250 film trailers were originally submitted to the festival. 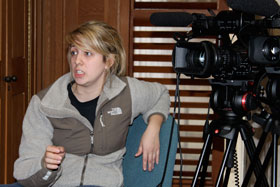 Inspired by her mother's experience with breast cancer, McKoin's documentary follows the lives of her mother Gloria McKoin, Jennie Ehren, and Dr. Lois Garland-Patterson as they battle disease.

"When my mom was first diagnosed, she was only given pamphlets to read about this disease," said McKoin. "I ended up reading all about breast cancer for her because she was in denial. My goal for this film is to give this DVD to every woman who is first diagnosed with breast cancer and her family so that they can have someone to connect and identify with — not by means of a piece of paper, but through real women and their stories."

A recent graduate of Loyola Marymount University in Los Angeles, McKoin created the documentary for her thesis project to earn an MFA degree in Film and T.V. Production. McKoin credits much of her film success in graduate school to the support of her Centenary family:

"If it had not been for the support of Dr. Hendricks, Dr. Glaros, Dr. Greg VanHossier-Carey, and the rest of the Centenary family, I would have never even imagined going to film school in Los Angeles."

The five film trailers that receive the most online votes by October 14, will have the honor of being showcased at the ArcLight Film Festival in Hollywood November 5-8. Voting is available online.