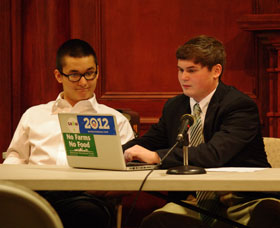 "I think the debate is important because it allows students to see the opposing view of things so that they may educate themselves," said Dylan Davis, a senior Political Science/Sociology major, who took part in the debate. "In addition, I think it helped some individuals who are sitting on the fence figure out where they may stand in this election."

Students participated in the mock debate as the presidential candidates, representatives of other parties, moderator, and members of party panels:

Though Warren, a freshman Political Science major, debated for a party that does not share her own ideology, she enjoyed participating:

"Answering questions from the moderator and the audience was incredibly nerve racking but super thrilling at the same time," said Warren. "I thought it was really important for the issues that define the current election to be separated from the presidential candidates and articulated through the voices of college students."

The mock debate comes on the heels of a student-led voter registration drive held on campus. Over 50 people signed up to vote during the drive.

Senator Peterson represents New Orleans and parts of Jefferson Parish in the Louisiana State Senate. She was elected chair of the Louisiana Democratic Party in April 2012, making her the first woman to ever hold this post.