SHREVEPORT, LA — Members of the Centenary community have returned from installing a window display for Sweet!, a candy store that recently opened in Los Angeles, CA. The Sweet! display features a Willy Wonka theme and was designed by William Joyce's Moonbot Studios. Bruce Allen and Jim Hayes, both of Jim & I Design Collective, created the display in their studio. 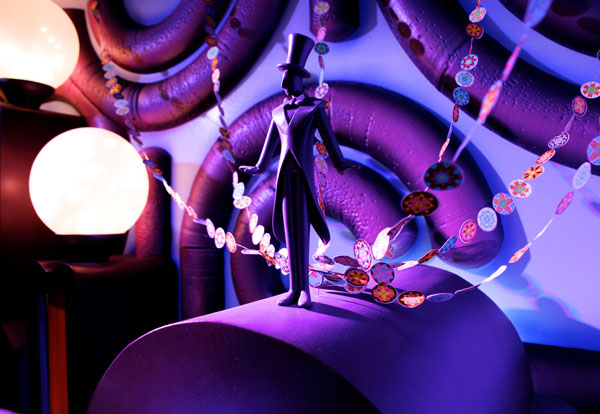 "Moobot gave us pictures of the designs, which had been approved by Nestle and family of Willy Wonka creator Roald Dahl, and we translated them into three-dimensional form," said Allen, Centenary Department Chair of Art and Visual Culture. "Many aspects had to be modified, simplified or expanded upon to finish the creations."

Current student Caitlin Lindsay helped create many of the small pieces in the window display, with a focus on the fish in the underwater window. Other work involved helping with graham crackers on the volcano and little chocolates that are placed throughout the display. 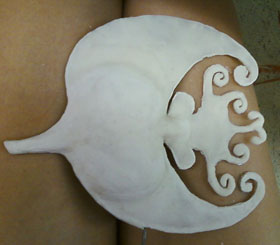 One of Caitlin Lindsay's fish

"My experiences at Centenary have influenced my art more than I could have ever imagined," said Lindsay. "Bruce Allen taught me that every creative idea is worth pursuing and that you can create anything if you put your mind to it. The Wonka project definitely showed me that anything is possible when it comes to art."

The Centenary artists also got the chance to meet Lucy Dahl, Roald Dahl's daughter. Allen noted that the author's daughter was very gracious:

"She and the Nestle executives said the displays exceeded their expectations and were concerned that the rest of the store might not meet our standard!"