SHREVEPORT, LA — Centenary students in Dr. Greg Butcher's Neuroscience 101 class explored the neurobiology of zombies this past week. The students created their very own zombies, albeit the cockroach variety, during the lab period Wednesday, which happened to fall on Halloween. Their lab replicated a predatory tactic of the jeweled wasp, which injects venom into a roach's nervous system then guides the roach back to its nest. 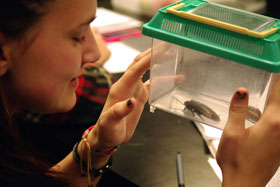 Aarstad looks at her "zombies"

"The students injected a mimic of natural wasp venom into the roaches," said Dr. Butcher, Associate Professor of Neuroscience. "Venom renders the roach paralyzed unless prompted to move—basically creating a roach on a leash."

The goal of the zombie research and lab was to get the students thinking about clinical neuroanatomy.

Before the lab began, students shared their hypotheses as to why the jeweled wasps would develop this predatory technique. Their guesses ranged from the wasp being physically unable to pick up the roach to giving the wasps' offspring a better chance at survival. Each group studied the behavior and movements of three Madagascar hissing cockroaches.

"I essentially learned that animal mind control is possible," said sophomore Jordan Aarstad. "When the roach's voluntary motor movement is inhibited by wasp venom it creates a zombie-like effect on the cockroach—the wasp can lead the roach wherever it wants to go, and the roach is non-resistant."

The neuroscience class began their research by looking at the clinical symptoms of zombies. The slow-staggered gait seen in many zombies is very similar to the movements produced by patients with cerebellar ataxia, a complex motor disturbance. The ability to ignore painful injuries could be due to either the loss of ascending sensory fibers in the spinal cord or damage to the primary sensory cortex.

For Psychology major Aarstad, the lab was not only educational but fun:

"I am not sure if I will need to know how to create zombie roaches to be an occupational therapist, which is what I hope to do in the future. But, either way, knowledge is power and always helpful!"