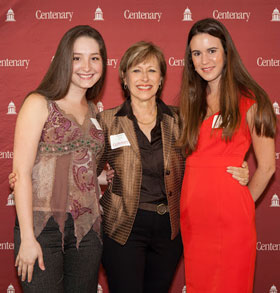 "Alumni and families of current students traveled from all over the country to enjoy the variety of events that we offered, and we had record participation," said Saige Solomon '05, Director of Alumni & Family Relations. "I am excited about building on this new model for Homecoming for years to come!"

The festivities kicked off on noon Friday, November 2, at the Alumni Awards Luncheon. Six alumni and one former long-time employee received awards for their dedication to the College.

"It was an honor to gather to recognize and celebrate these seven distinguished members of the Centenary community," said Solomon. "Their leadership as well as their commitment to Centenary is something to be admired and respected."

A student and parent gumbo cook-off and an All Class Reunion party followed that night. Saturday morning, Centenary alumni were up bright and early for the Quinq Club Breakfast, honoring the 50th anniversary of 1962 graduates. Judy Thurmon Butcher '62 and Margetta Spears Stoddard '62 emceed the event, and 12 alumni were presented with Quinq pins and certificates, officially inducting them into the Quinq Club.

Face painting, a jumpy house, a live band, grilled burgers and hotdogs made the tailgate in the Gold Dome parking lot the place to be for the whole Centenary family Saturday afternoon. Following the tailgate, the Ladies and Gents swim teams dominated Hendrix and Austin College, earning 13 first-place finishes in 24 events.

Later that afternoon, the 2012 Homecoming Court and Royalty were announced at half-time of the Maroon & White basketball scrimmage.

The weekend ended with two Rhapsody in View performances from the Centenary College Choir and a memorial service honoring members of the Centenary community who have passed away.

Annually, Centenary's Alumni Association honors alumni during the alumni awards banquet at Homecoming. Nominate someone to be honored at next year's Homecoming today.