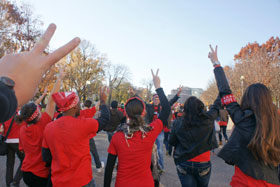 "I participated in this rally because of my strong conviction that child soldiering is a stain on our humanity," said Ring, a senior political science major. "I participated in anticipation that one day my children will come to me and ask, 'Did you know about this?' I will tell them 'yes.' I MOVEd in order to tell my children I used my privilege and voice to bring light to the invisible children of Central Africa."

The MOVE: DC rally was one piece of the large-scale advocacy undertaken by Invisible Children, a group that engages regional partners and civil society leaders in LRA-affected regions to bring an end to conflict. Over 10,000 participants in red KONY shirts marched around the White House and Washington Monument as a call for international leadership to arrest Joseph Kony and his top commanders, protect people from further LRA attacks, and restore communities devastated by their violence.

Centenary students are well acquainted with Invisible Children and their KONY 2012 campaign as the College hosts a chapter of Invisible Children's international Schools for Schools program. Schools for Schools raises money to rebuild schools in Uganda, build early-warning radio networks in D.R. Congo, and fund the construction of child soldier rehabilitation centers in LRA-affected areas.

"As an active member of School for Schools, I invested a lot of energy in bringing the KONY 2012 movement to Shreveport," said Ring. "This rally was just a natural extension of that movement. I participated in the rally because of the profound statement we were making by MOVE-ing together around this issue."