SHREVEPORT, LA —This January, Professor of Art History & Visual Studies Dr. Lisa Nicoletti was invited by the Anne Frank House in Amsterdam, the Netherlands, to conduct research on Otto Frank's photography. This is a continuation of a research project she began in 2011 through the Charlton H. Lyons Faculty Summer Research Award. 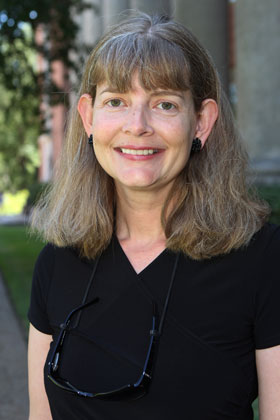 Nicoletti has worked in Holocaust studies for nearly two decades and has been actively teaching Centenary students about the Holocaust since 2001. She has met and traveled with Holocaust survivors, rescuers, and educators in the Netherlands, France, Germany, Austria, Poland, the Czech Republic, and Israel to explore historical museums, memorials, and Nazi ghettos, concentration camps, and death camps firsthand. Studying an integral piece of history that is slowly fading from recent memory and actively denied, Nicoletti has been a champion for truth, working to reveal an honest portrait of the Frank family through photography. Her investigations led Nicoletti to question and revise even some of her own initial assumptions about the Franks.

In fall 2010, Nicoletti presented Doubly Exposed: Developing a Critical Response to Otto Frank's Photography at the Lessons & Legacies Conference on the Holocaust at Florida Atlantic University. Her research indicated that Otto Frank was a blossoming photographer of impressive stature.

"At that time there were several photography exhibits traveling around the country of the Frank family photos," said Nicoletti. "Many said that all the photos were made by Otto Frank and that he was an early user of a 35mm Leica camera. Some of these photos were quite impressive technically and aesthetically. That interested me as a photo historian because that technology would have been so novel at that time. There were a handful of really good amateur 35mm photographers in the 1920s and 1930s who eventually became part of the photo history canon, such as Henri Cartier-Bresson, Walker Evans, and Ilse Bing. I wondered, should Otto Frank be listed among them?"

Soon after, Nicoletti had the opportunity to interview Frank's stepdaughter Eva Schloss in London and began to doubt whether this theory was correct. While Schloss confirmed Frank's interest in art, she believed his photography was amateurish.

"(Schloss) had been a photographer and Otto gave her his Leica," said Nicoletti. "She saw things that I thought were intentional as the accidents of a beginning photographer. It was discouraging to hear. I thought, 'There goes my thesis.'"

In 2011, Nicoletti was also able to spend time at the Anne Frank House and examine nearly 6,000 digital photographs from Frank family albums. She tried to determine equipment used, the chronology of the photos, and a recognizable style. At that time she discovered a hidden self-portrait of Frank in a reflection in one of the photographs. It was an exciting moment for Nicoletti and the other researchers as it seemed to be a tangible piece of evidence that could eventually help them figure out whether Otto Frank was the sole creator of the family photos.

Nicoletti was invited to spend another week with the Anne Frank House Collections staff as a consultant in January. This time she got to examine the original photographs in the four surviving family photo albums.

"This is something I had really hoped I could do," said Nicoletti. "Everything from the paper, to the tone, to the matte finish, to scratches on the prints and fingerprints in the emulsion, they tell you something about the creation and creator of the photo, about the camera that produced the image. It tells you about the larger story."

The trip helped Nicoletti and Anne Frank House researchers dispel myths about the Frank family photos. They were able to analyze the reflection of Otto she had discovered in 2011, and determined with photographer Harold Strak that it only proved Otto was in the room, not that he was the creator of the photograph. Nicoletti explained that with the first exhibitions and publications, there was romanticism attached to Otto Frank's photography. For instance, some that claimed Frank, mourning the loss of his daughters, never took another photo after the war—a claim that is patently false. Nicoletti showed facsimiles to antiquarian photographers, friends and former Attaway Fellows John Shimon and Julie Lindemann in Appleton, Wisconsin, who helped reveal that Frank was not first or primarily a Leica photographer, as had been previously suggested. Many images have been accidently misdated and incorrectly captioned because of inaccuracies recorded by Anne Frank in her diary. Others have been incorrectly attributed to Otto, but were actually photographed by his wife or daughters, or by professional photographers. Their studio stamps appear on the back of several photos. On the last day she made an exciting discovery with researcher Karolien Stocking Korzen that Margot Frank, Anne's older sister, was also taking photos. These historical errors, while minor, contribute to a greater story that has inaccurately depicted the Franks.

For Nicoletti, one of the most troubling mistakes exposed by this research concerns an oft-used image thought to depict the family's Jewish identity. An image of Anne and Margot Frank dressed up in costume with friends — frequently published in books and on websites as well as displayed in exhibits - was connected to the Jewish festival of Purim. But by comparing the date of the photo to Jewish and secular calendars, one sees that this single photograph once linking them to a Jewish religious observance was likely taken for Margot's birthday or carnival instead.

"The issue of not having an image that can illustrate Jewish observance is going to be really unsettling for anyone who wants to see the Franks as a Jewish family first," said Nicoletti. "But Anne shows in her diary and Otto said during his life that they were secular Jews. Otto wanted the script of the Diary of Anne Frank play and film to de-emphasize their Jewishness. He did not see Anne's identity as primarily Jewish; he viewed his family as German first. Her Jewish heritage was the reason she was killed, yes, but not something she lived and breathed."

Nicoletti contends that because of Holocaust denial, something that first started with the Nazis, historians must be extremely accurate in what they claim. There has been much myth-making in the last century that has "de-textualized" and "de-historicized" Anne Frank. She has experienced a posthumous, glamorized Americanization, for instance, due to the popularity of her diary on stage and screen. "Even historical exhibitions and editions of her diary can misrepresent her," said Nicoletti.

Nicoletti's time at the Anne Frank House was more than an exciting opportunity. It was also a formative experience that allowed her to contemplate the weight of art history.

"Even when we know the biography of individual artists, we still get so much wrong about the artwork," said Nicoletti. "We create myths around works based on how big the artist's persona was. If we look at the Mona Lisa as a painting and ignore all the legends, biographies written by others, or even what Leonardo says about it himself, the object can say a lot about that particular moment and period in time. It's a more historically accurate account in some ways. It makes me rethink this whole field of art history—how much of history is mythmaking and how much is grounded in verifiable facts?"

Experiences like Nicoletti's trip to Amsterdam have given Centenary unique opportunities as well. Nicoletti's Holocaust and Frank family studies; connections to people like rescuer Miep Gies; the first director of the Anne Frank house; Otto's stepdaughter; and her friendship with local survivors Dr. Rose and Louis Van Thyn have afforded her priceless insight into a historical event that is escaping the attention of a new generation.

"I'm lucky that my friends are among the best scholars on Anne Frank," said Nicoletti. "It's fantastic to find out what's going on in their scholarship and know the latest on Anne."

Fortunately for Centenary, many of these colleagues, including David Barnouw, Elma Verhey, Barry van Driel, and Brad Prager, have come to campus to share their research on World War II with the community. Their narratives, along with Nicoletti's steadfast commitment to Holocaust research, are all part of the larger goal of preserving the memory and truth of the Holocaust, and keeping this historical period alive for her students.

Nicoletti has been teaching at Centenary since 1999 and is currently Professor of Art History and Visual Studies. She received her BA from Augsburg College, an MA in English from the University of Minnesota-Duluth, and an MA and PhD in art history from the University of Wisconsin-Madison. She actively publishes on museum exhibitions and art and manages Centenary's Museum Management Program. Nicoletti currently serves as the Head of Collections and Research at the Meadows Museum of Art, which she directs with Professor Bruce Allen.