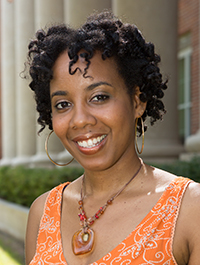 "I'm excited to be co-teaching the "Paris Noir: Black America in the City of Light" course with Dr. Dana Kress," said Augustin-Billy. "It will be a unique challenge - and a privilege - to have the entire city of Paris as my classroom."

Augustin-Billy received her M.A. and Ph.D. in French language and literatures from Washington University in St. Louis and also earned a certificate in Women, Gender, and Sexuality Studies as part of her graduate training. Her research interests include analysis of gender and sexuality in 19th and 20th century French literature, travel literature, and themes of migration and exile in Francophone African and Caribbean literatures and cultures.

At Washington University, Augustin-Billy taught all levels of French language in addition to upper-level courses in literature and gender studies. She has also taught English as a Second Language (ESL) courses at the American University of the Caribbean in Les Cayes, Haiti.
Augustin-Billy was attracted to Centenary because of its small size and liberal arts approach, and immediately felt an excitement and energy when she visited campus.
"Everyone I met — from the President, to members of the faculty, to the students I shared a meal with in the Caf — was so nice and so enthusiastic about Centenary," said Augustin-Billy. "During my teaching demonstration, the students were incredibly engaged, and that excitement was contagious."

After returning from Paris and wrapping up the "Paris Noir" course in the College's August immersive term, Augustin-Billy will teach an introductory French language course and an upper-level French literature course during the traditional fall semester. As a teacher, she uses literature as a vehicle to draw out themes from the past that resonate in the present, and encourages her students to use contemporary cultural references to make sense of historical ideas and perspectives.